Dear Sir/Madam,
I am writing to notify you of my stage adaptation of The Lady’s Maid’s Bell for a local community theatre here in Auckland, New Zealand. As far as I am aware this will be the first stage production of The Lady’s Maid’s Bell since the story was first published. If you have any members in Auckland, the following information may be of interest to them:
https://pumphouse.co.nz/whats-on/show/one-act-play-festival/
The Lady’s Maid’s Bell by Edith Wharton plays nightly at 7.30pm at The Pumphouse Theatre, Takapuna from 9th to 13th October.
If you require any further information please do not hesitate to contact me.
Thank you.
Kind regards,
Jason Moffatt

[EWS Members will soon be receiving an email from Jennifer Haytock containing this information and a link for voting. Here are the candidate biographies for the election.]

When you receive the email link, please vote to affirm or not affirm the candidate for Secretary and candidates for Member-at-Large (two positions open). Voting will be open until October 8, 2018.

Myrto Drizou is Assistant Professor of English at Boğaziçi University in Istanbul, where she teaches American and transatlantic literature. She received her PhD in American and Comparative Literature from the State University of New York at Buffalo and has previously taught at Valdosta State University and the University of Illinois at Springfield in the US. She is associate co-editor of the Edith Wharton Review and editor of the volume Edith Wharton for the series Critical Insights (Salem Press, 2018). She has also served as book review editor of the Edith Wharton Review and as membership coordinator for the Edith Wharton Society. Her work on Wharton has appeared or is forthcoming in The New Edith Wharton Studies (Cambridge UP, 2019); Gothic Landscapes: Changing Eras, Changing Cultures, Changing Anxieties (Palgrave, 2016); 49th Parallel: An Interdisciplinary Journal of North American Studies (2016); and Critical Insights: American Writers in Exile (Salem Press, 2015). Other published work includes essays on Theodore Dreiser, Frank Norris, Henry Adams, and Mary E. Wilkins Freeman. She is currently editing a special issue on the global dimensions of American literary naturalism (forthcoming in The New Centennial Review) and is working on a comparative study of American and Greek literatures, in which Wharton is placed alongside early twentieth-century Greek writers, such as Alexandros Papadiamantis and Konstantinos Theotokis. As an Americanist scholar of Greek descent whose work has matured through the cross-cultural experience of teaching in both the US and abroad, Myrto is invested in sustaining the international scope of the EWS and supporting the network of Whartonians across the world.

I hold a BA, and a Masters in American Literature and Film from University College Cork. My PhD research examines representations of marginal figures in urban space in twentieth-century American literature, with a particular focus on on the writing of Edith Wharton and Anzia Yezierska. I am an active member of the American Studies community in Ireland and served for two years as the Postgraduate and Early Career representative on the Executive Committee of the Irish Association for American Studies. During my tenure, I organised two symposia dedicated to postgraduate and early career researchers, developed strong links with colleagues in the British Association for American Studies, and helped to create a vibrant network for postgraduates and early career researchers in Ireland. I am interested in fostering a more inclusive environment for postgraduates, ECRs, and those who are not in traditional academic roles. I believe I can play a part in increasing participation in Wharton studies, particularly here in Europe, which would encourage diversity in the discourse around the work of an author so dedicated to her trans-Atlantic identity.

Rita Bode, Ph.D. (University of Toronto), is professor of English Literature at Trent University, Canada. Her research interests center on women writers of the nineteenth- and early-twentieth centuries. She has presented at several Edith Wharton conferences, and her article on Edith Wharton’s and George Eliot’s historical novels appears in Edith Wharton and Cosmopolitanism. Other publications include work on Harriet Beecher Stowe and George Eliot, and Canadian writer L. M. Montgomery, a contemporary of Wharton’s. She is a past president of the Northeast Modern Language Association, and was the VP of Organizational Matters and Conference Director of the 2015 Society for the Study of American Women Writers Conference. She is very pleased to be nominated for a member-at-large position of the Edith Wharton Society.

Next week: Wharton, author of The Age of Innocence and The House of Mirth, first woman to win a Pulitzer Prize https://bbc.in/2DvJ2GX 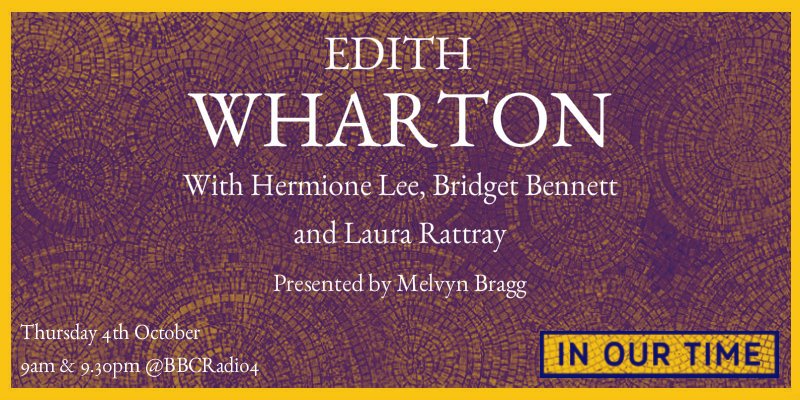 Dear Edith Wharton Society members,
The Edith Wharton Society is now accepting nominations for the position of Secretary and two Members-at-Large, for the 2019-21 term.
Secretary
From our Constitution:
“5.4.  The Secretary shall take and distribute minutes of all meetings of the Society and of the Executive Board and shall forward minutes to the Web Master for posting on the society’s web page.  The Secretary shall coordinate the nominations of new members of the board.”
5.7 “To achieve continuity, officers shall ordinarily succeed one another in this order: the Vice-President shall become President, and the Secretary become Vice-President, and the President become the Immediate Past President.”
Member-at-Large
Members-at-Large may be asked to adjudicate the EWS prizes, and they have the option of organizing, or deputizing someone to organize, the guaranteed EW panel at NEMLA, SAMLA, and other regional MLA conferences (5.9).
For further information about these positions, please review our Constitution at
https://edithwhartonsociety.wordpress.com/membership/constitution-and-by-laws/.
If you have any questions about either position, please also feel free to contact any current Society officer, including President Paul Ohler (paul.ohler@kpu.ca), Vice President Melanie Dawson (mvdaws@wm.edu ), or Secretary Jennifer Haytock (jhaytock@brockport.edu) for further information.
Candidates must be members in good standing of the Edith Wharton Society. Membership dues can be paid here:
https://edithwhartonsociety.wordpress.com/membership/
Please email Jennifer Haytock with nominations by Wednesday, Sep. 19, 2019. Please include which position you are nominating yourself for and a one-paragraph biography. A voting period will follow the close of the nomination period.
To vote, you must be a member in good standing. I encourage you to check on your membership status (https://edithwhartonsociety.wordpress.com/membership/directory/) and update it if necessary.
Sincerely,
Jennifer

My name is Robin Oliveira. I live in Seattle. I am the author of three books, My Name is Mary Sutter, I Always Loved You, and Winter Sisters, all historical fiction. I hold an MFA in Writing from Vermont College of Fine Arts. I’m researching my next book  and came across your name while perusing the Edith Wharton Society Web site. The book will not be non-fiction, but fiction.
I have a question and I’m wondering whether or not you can either direct me to someone who is an expert on The Age of Innocence, or whether or not you have considered the following question. I realize I’m imposing, and if you are too busy to address my question, thank you for your time, and I understand.
I’ve been studying The Age of Innocence in preparation for my new book. I’m very interested in the role of rumor in the narrative. There are many ways in which rumor works in the novel, but I’ve run into an interesting, almost niggling example. In my close reading of the text, I’ve noticed that Wharton gives three separate descriptions of Countess Olenska’s arrival in NY.
One,  she appears suddenly and without warning: chapter II: Archer knew that she had suddenly arrived from Europe a day or two previously… “
Two,  her uncle Mingott went to NY to retrieve her: chapter II: “I believe Lovell Mingott went out to get her….” This is Lefferts.
(Both can’t be true, since Archer is so close by now to the Mingott family that he would have known whether or not Mingott went out to get her. Mingott’s absence and errand would have been known to NYC society.)
And third, all NY knew she was coming: I can’t at this moment, pinpoint it in the text, but there is a reference that says it was known to everyone that she was coming.
MY question is whether or not this inconsistency in the text is something Wharton scholars have discussed to your knowledge? If so, have they concluded that Wharton was deliberate in placing three different explanations of Ellen’s arrival as a subtle machination of rumor in the novel? Or, perhaps it is a way to increase the mystery around the Olenska character? Both seem possible to me. Less possible is that Wharton was careless. The novel is so meticulously crafted that as an author, I doubt she was, but I’m wondering.
Have you an understanding/opinion?
Thank you very much for your time,
Sincerely,
Robin Oliveira
www.robinoliveira.com

Wharton and the Family

The Edith Wharton Society invites proposals for papers on “Wharton and the Family” for inclusion in the ALA 2019 program in Boston. Proposals may approach any aspect of Wharton and the family, including issues of maternity, paternity, childrearing, sibling relationships,  queer families, and more. Papers may also compare Wharton’s representations of families with those of her contemporaries. Titled proposals (approx. 300 words) are due to Jennifer Haytock (jhaytock@brockport.edu) by December 1, 2018. Please include any requests for AV needs in your proposal. Scholars whose proposals are accepted must be members in good standing of the Edith Wharton Society by the time of the conference.

THE SHADOW OF A DOUBT

“My dear, after twenty, all life is pretending, and it’s easier to pretend in a good house, than alone in a garret!” advises Lady Uske, urging our heroine Kate to return home to her husband, in Edith Wharton’s long-lost drama. Written 20 years before The Age of Innocence earned her the first Pulitzer Prize for Literature to be awarded to a woman, Wharton’s The Shadow of a Doubt contains kernels of the socially conscious characters and themes of her later masterpiece novels.

[read the rest at https://www.redbulltheater.com/the-shadow-of-a-doubt]