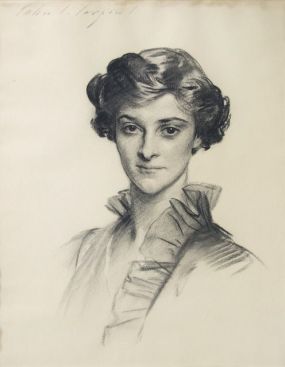 From The New Yorker, on the well-known performer and monologuist Ruth Draper.

Over lunch, a little later, Mulcahy took out her phone and played one of her favorite discoveries so far: a brief interview with Draper on a BBC program about Henry James, whom she had known. (James’s father was a friend of Draper’s grandfather, and James once wrote a stilted, highly Jamesian monologue for her, which she never performed.) Draper recounts a walk she took with James at a house party, also attended by Edith Wharton, shortly before he died. She describes his “rather ponderous manner of speaking” and various odd motions he made with his right hand as he spoke—exactly the sort of close observations, Mulcahy said, that underlay all her performances. Draper, in the interview, then says that she had once asked James whether he thought she ought to pursue a career as a conventional actress, perhaps by attending drama school. “He took a long while to answer,” she recalls. Then she lowers her voice: “ ‘No—my dear child. You—you have woven—you have woven your own—you have woven your own beautiful—beautiful little—Persian carpet. Stand on it.’ ” ♦

Does this remind you of James’s advice to Wharton to “Do New York”?

From Antiques and the Arts, http://www.antiquesandthearts.com/william-merritt-chase/

BOSTON, MASS. — William Merritt Chase is remembered today not only as one of the great artists of his generation, but also as a gifted and engaging teacher, inspiring a generation of artists who would go on to establish America as an epicenter of Modernism in the Twentieth Century. As such, he is an essential bridge between that Modern era and the time when American art was still in its infancy. His career also encompasses a time of great change in American culture, best seen in his elegantly rendered, intellectually challenging and attention-getting portraits of women. Such portraits are a highlight of “William Merritt Chase,” organized by the Phillips Collection, Boston’s Museum of Fine Arts (MFA), the Fondazione Musei Civici di Venezia and the Terra Foundation for American Art, and on view at the MFA through January 16.

In Edith Wharton’s 1905 novel The House of Mirth, published while Chase was in the autumn of his career, a pivotal scene has the heroine, Lily Bart, participating in a tableau vivant. The term refers to a popular pastime of the turn of the century, in which participants posed in elaborate costumes and settings as living recreations of famous works of art. Lily, whose social standing is in jeopardy but whose beauty remains unrivaled, recreates a portrait by Joshua Reynolds, and Wharton’s elegant prose draws the reader into unguarded admiration. The scene is swathed in poetry and romance until its denouement, when Wharton’s omniscient narrator reveals the ugly way in which certain men in the audience have chosen to view her performance.

William Merritt Chase was also fond of tableaux vivants. In “Old Masters Meet New Women,” her insightful essay for the exhibition catalog, MFA curator Erica E. Hirshler writes that Chase used his studios in New York City and Long Island, N.Y., to stage recreations of paintings by the Old Masters he revered. As a rule, he did not literally depict such entertainments in his paintings and pastels, but a sense of theatricality is nevertheless strong throughout his body of work. His famed 10th Street Studio in New York City was a particularly theatrical place, a frequent setting for his painted portraits and interiors. Diane Paulus of the American Repertory Theater, who provides commentary for the MFA’s mobile guide, notes that Chase’s interiors are arranged like stage sets in order to highlight particular passages or moments of action.

[read the rest at the link above]

Consider, for example, the Dows clan of OUR TIME AT FOXHOLLOW FARM: A Hudson Valley Family Remembered (Excelsior/State University of New York, $50) and the 800-acre Rhinebeck estate they intended to be “a sort of Mount Vernon on the Hudson.” The patriarch, Tracy Dows, was an avid amateur photographer, and David Byars’s book is based on the 26 private albums, dating from 1903 to the 1930s, that Dows’s daughter donated to Hudson River Heritage. There are plenty of views of the pillared mansion and its outbuildings (including the guesthouse where Thomas Wolfe wrote “Look Homeward, Angel”) as well as the elaborate spreads of pals like the Astors, who had a vaulted, Corinthian-columned indoor swimming pool, and the Dinsmores, whose guests could play golf on their nine-hole course. The text is filled with the era’s boldface names — Edith Wharton, Charles Dana Gibson, the Olmsted brothers, Alice Roosevelt Longworth — and the family’s travels took them to the era’s favorite high-end locales: the “cottages” of Newport; the exclusive resorts of Hot Springs, Va., and Jekyll Island, Ga.; the Beatrix-Farrand-designed gardens of Seal Harbor, Me. But in between the lines of the captions are stories waiting to be told.

Anna Girling just published an article in the TLS about Wharton’s correspondence to John Murray. To read the article, click on the links below.

Lit Crawl NYC is hosting a roadtrip from NYC to the Edith Wharton estate in the Berkshires on Sunday, June 22.

We’ve chartered a bus with seats for 50. If members of your organization are interested, we’d love to have you.

Tickets are $45 until 6/11. (Available here: http://ow.ly/xFa5A ) Please spread the word to other bibliophiles. 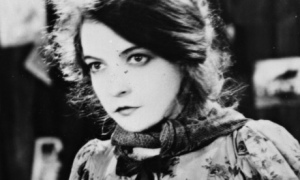 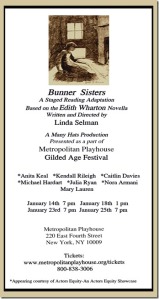 The Gilded Age has memorialized many successful and pruriently colorful businessmen in fact and fiction, but one of the canniest and most ruthless of them is a woman. Edith Wharton’s “The Custom of the Country” turned 100 this year, and the adventures of its heroine, Undine Spragg, remain as brazen today as when she first advanced upon the American scene.

Ms. Wharton set nearly all of her novels in the drawing rooms and country estates of the New York rich. In her hands, high society became a decorous killing floor, and a marketplace as freewheeling as the industrial postbellum economy in the U.S. at large.

The market in Ms. Wharton’s books is the marriage market. Ms. Wharton plumbed the analogy between the social and business worlds deeply, rendering courtship and marriage as cold and calculated exchanges for profit. “The emotional center of gravity’s not the same” as in the old days, notes one of the characters in “Custom.” Once it was love, but now it’s business. Ms. Wharton’s novels of manners are not marriage plots so much as business narratives.

[read more at the link above]