How Can We Read Edith Wharton Today?

Published in 1913, “The Custom of the Country” follows the social rise of Undine Spragg, a fictional character who, in many ways, feels very modern.

This essay is part of T’s Book Club, a series of articles and events dedicated to classic works of American literature. Click here to R.S.V.P. to a virtual conversation, led by Claire Messud, about “The Custom of the Country,” to be held on Jan. 28.

“The Custom of the Country”(1913),like much that Edith Wharton wrote, can be described as a novel of manners. That’s to say, a social fiction in which the carefully observed customs of a particular society shape the characters’ actions and the plot. The designation somehow implies frivolity, or at least, traditionally, the feminine or domestic sphere (Jane Austen could be considered the first author of such works); and in this period of profound crisis in American society, it might seem easy to dismiss the relevance of such diverting works.

In this case, Wharton follows the social rise (and rise) of beautiful young Undine Spragg (named after her grandfather’s patented hair-crimper), who arrives in New York City from the fictional town of Apex City, Iowa, in the company of her newly moneyed, wide-eyed parents, Abner and Leota. She initially takes instruction on New York society’s hierarchies from gossip columns and her manicurist, but Undine’s looks soon gain her entrée into conversation with a fashionable portraitist named Popple, and then an invitation to dine at the home of the elegant Fairfords, where Mrs. Fairford’s brother, Ralph Marvell, pays her particular attention. On their eventual honeymoon, he’ll introduce her to European and in particular Parisian society, thereby widening the horizons of Undine’s social ambition: New York comes to feel provincial and dull next to Paris.

When she began writing “The Age of Innocence,” in September, 1919, Edith Wharton needed a best-seller. The economic ravages of the First World War had cut her annual income by about sixty per cent. She’d recently bought and begun to renovate a country house, Pavillon Colombe, in Saint-Brice-sous-Forêt, where she installed new black-and-white marble floors in the dining room, replaced a “humpy” lawn with seven acres of lavish gardens, built a water-lily pond, and expanded the potager, to name just a few additions. She was still paying rent at her apartment at 53 Rue de Varenne, in Paris—a grand flat festooned with carved-wood cherubs and ornate fireplaces. The costs added up.

The Atlantic has recently published a story from the Beinecke Library archives, “A Granted Prayer,” previously known primarily to Edith Wharton researchers who have read the many unpublished works available there. It’s a delightful story; thanks and congratulations to Sarah Whitehead for bringing it to a wider public!

AT FIRST, THE VISIT was like a fairy tale. In Edith Wharton’s 1912 novel The Reef, George Darrow comes to visit Anna Leath at Givré, the French chateau she inherited from her now-dead first husband. After delays and misunderstandings, the couple finally agrees to an engagement, and Givré seems like the romantic backdrop for their love. For Anna in particular it has taken on a renewed beauty with Darrow’s arrival; she sheds her impression that it is “a dull house, an inconvenient house, of which one knew all the defects, the shabbinesses, the discomforts.” On a drive through the countryside, they even discover a kind of mythical abandoned house:

[T]hey stopped the motor before a ruined gateway, and stumbling along a road full of ruts, stood before a little old deserted house, fantastically carved and chimneyed, which lay in the moat under the shade of ancient trees. They paced the paths between the trees, found a mouldy Temple of Love on an islet among reeds and plantains and, sitting on a bench in the stable-yard, watched the pigeons circling against the sunset over their cot of patterned brick.

Darrow returns to this crumbling, decaying, deserted house in his mind at the end of the day. He and Anna remain separated in the evening, both spatially and conventionally; they have not yet even announced their engagement, and Givré is populated by a cast of entangled characters, including Anna’s first husband’s mother, her daughter, her stepson, a governess, and servants. The deserted house, in a way, is the antithesis of Givré: a space known only to the couple, romantic in its desertion, the cottage complement to the fairy-tale castle. In an early draft of The Reef, Wharton even dubbed it “The Sleeping Beauty house.”

Read the rest at https://lareviewofbooks.org/article/makeshift-refuges-edith-whartons-home-building/

For all her successes, Edith Wharton made a habit of spurning the conditions of her own fortune. She became the first female novelist to win the Pulitzer Prize in 1921—for The Age of Innocence—only to wind up mocking the prize less than a decade later. In her novel Hudson River Bracketed (1928), she describes the thinly veiled “Pulsifer Prize” as a sham, the product of a “half-confessed background of wire-pulling and influencing.” By the time she was honored again by the Pulitzer committee—this time by proxy, for playwright Zoe Akins’ 1935 adaptation of one of her novellas, The Old Maid—Wharton had distanced herself from the prize and its milieu.

Her relationship with motion pictures was similarly detached, even as she received consistent financial benefit from the industry throughout the final decades of her life. In a 1926 letter to a friend, she comments, “I have always thought ‘The Age’ would make a splendid film”—which it did many years later, in 1993, in the hands of Martin Scorsese. But before that,it was made into a silent film by Warner Brothers in the 1920s, along with many of her other novels. Wharton’s sale of film rights to her 1928 novel The Children fetched her $25,000 (more than $350,000 in today’s dollars). She used the money to help maintain multiple French residences, even as she declined to enter a movie theater during her lifetime. Indeed, she remained totally uninterested in films, even those based on stories she had invented. 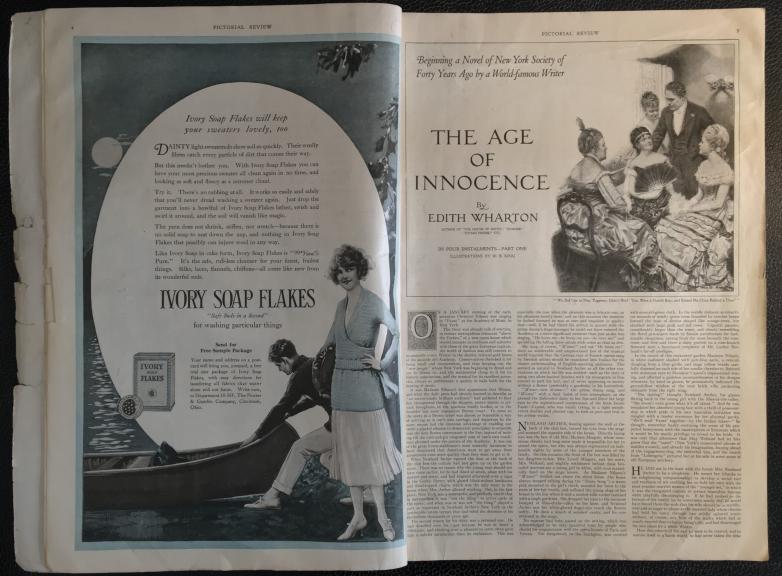 The initial installment of The Age of Innocence debuted in the July 1920 issue of the Pictorial Review, opposite an ad for Ivory Soap!

The curators at The Mount have also created an online exhibition, Writing The Age of Innocence, which introduces readers to Wharton’s process from start to finish— apparently it took her less than seven months to write this masterpiece! You can page through her penciled notes and photographs of the people and places that inspired the novel.

Several online events to celebrate the centennial are on the schedule, too, including:

Anne Schuyler, Director of Interpretation and Nicholas Hudson, Curatorial Assistant, share insights from their research in preparation for of the centennial celebration of Wharton’s Pulitzer prize-winning novel.

100 Years of Innocence: A Conversation with Arielle Zibrak and Sarah Blackwood Thursday, July 9 at 4:00 PM

Authors and Wharton scholars Arielle Zibrak and Sarah Blackwood will discuss changing reactions to The Age of Innocence over the last 100 years. This is an online event.

Author Elif Batuman and Wharton scholar Jennifer Haytock will share how their own multiple readings of The Age of Innocence has informed their understanding of social norms, class and privilege, from Wharton’s old New York through today.

From the perch of post-war modernity, one could receive Victorian manners and frames of reference as quaint, dare I say, innocent. However, Wharton harbors no interest in a glossy, rose-hued history of gentility. The world she renders is chilly, sleek, and stridently solipsistic: it is as devoted to its own aggrandizement as it is to its rigorous self-surveillance.

In “House of Mirth,” Edith Wharton’s heroine turns a corner and sees grand new houses, “fantastically varied, in obedience to the American craving for novelty.” Americans at the turn of the century felt they had inherited the whole of Western civilization, that it was theirs to do with as they wished.

I asked Mr. David, a social critic of Hollywood mores who has been called “a savage Edith Wharton” by his friend Larry Charles, why all these celebrities seemed so devoid of self-awareness.

“I don’t know, that’s the $64,000 question,” he said. “I guess their instinct is to help, their motives are good, and they don’t consider how it might come off.” But, he added, “I think it’s a complete lack of judgment to talk about your lifestyle at this time, it’s crazy. Of course other people are going to react like that.”

Eaton: We are beginning to generate ideas here — ideas that would work for Masterpiece. And then we talk to some of these independent companies and PBS Distribution about their interest in initiating our projects.

This is the absolute reverse of how things used to work, though it did happen occasionally. We initiated Middlemarch, for instance, years ago. We had the idea, found a writer — Andrew Davies — and brought it to the BBC. And we did this with Edith Wharton’s The Buccaneers, which is one of my favorite pieces of literature. But we weren’t the primary funder of those co-productions.

Edith Wharton kept restlessly editing her best sellers even through numerous print runs. In 1921, she finished fine tuning “The Age of Innocence” upon its sixth printing and tucked one edition onto the shelves at her chateau in Southeastern France.

That copy, with her signature and bookplate, has resurfaced in time for the centennial of the Pulitzer Prize-winning novel. It has been donated to the library at another of her palatial homes, the Mount, a museum in Lenox, Mass.

This is the only known English-language version of “The Age of Innocence” that belonged to Wharton, said Susan Wissler, executive director of the museum. (Examples of the writer’s copies of many of her works are already at the Mount; gaps include her collected teenage poems.) Ms. Wissler added that the museum’s book collection, as it grows, powerfully evokes Wharton’s interests and presence: “The library very much provides us with her soul.”

As of today, January 1, 2020, Wharton’s quartet of novellas Old New York is in the public domain. To celebrate this, here’s New Year’s Day (the Seventies), courtesy of Project Gutenberg Australia.

Here are PG Australia’s texts of the novellas:

Links to the other novels and novellas available online are being updated today and are available here: https://edithwhartonsociety.wordpress.com/works/novels-and-novellas/
NEW YEAR’S DAY
(The ‘Seventies)

“She was BAD…always. They used to meet at the Fifth Avenue
Hotel,” said my mother, as if the scene of the offence added to the
guilt of the couple whose past she was revealing. Her spectacles
slanted on her knitting, she dropped the words in a hiss that might
have singed the snowy baby-blanket which engaged her indefatigable
fingers. (It was typical of my mother to be always employed in
benevolent actions while she uttered uncharitable words.)

[read the rest at the link]

Although we usually don’t post items for sale at the EWS site or on this listserv, it’s not every day that a piece of Edith Wharton’s original childhood home comes on the market.  The information is below, if you’re interested.

Comment: Hi Donna, my husband and I live in Newport RI and are selling our condo. Our condo is located at Pen Craig — the childhood home of Edith Wharton. The Gatehouse (where the condo is located) is the last remaining element of the original Wharton estate. RI Monthly magazine just issued the attached article on our condo (see website reference above) which includes quite a bit Edith Wharton background information. I thought your members might be interested in this, and of course we would love to sell Pen Craig to an Edith Wharton admirer! I hope you will consider posting this link! Please let me know if I can provide more information to you on this! Thank you!